This summer I found a dead crow on the roof of my house. Being dead, it did not look too good.

The crow must have been there awhile, as it was extremely flat, dehydrated and very tattered, feather wise. There was no sign of bugs having eaten it in any way. Death by old age I thought, or by poisoning after having dined on a poison filled rodent. It happens. Maybe insects can detect for poison and avoid consumption?

I picked said crow up, placed it in a plastic bag, dropped it in my garbage container, sending it on its way to be interred in a landfill of unknown location to myself. Though definitely not the same landfill that my dear childhood teddy bear, Tubby, came to know as his final resting place. Tubby is interred some 400km away from my geographical location.

Yes, when my mom was sick and knew it would soon be over, she had one of my brothers clean out the closet in her spare bedroom. Tubby met his fate without even a chance of reprieve by a last minute phonecall from his executioner, my brother. I miss you Tubby.

Oh yes, dead crow. Thought nothing of my home crow experience until a few weeks ago, when I started to notice that quite a few crows I see around the city seem to be afflicted with some sort of disorder that affects their plumage, or more specifically the lack thereof in patches on their bodies. As well, the affected ones definitely even look sickly in nature. My immediate thought was some sort of mange.

The above photo is that of a crow dead from West Nile virus. The discoloured plumage in the centre of its back looks like what I have noticed on many crows around the city. Being curious about things, I went to my magic study machine and found out about crows being susceptible to West Nile virus, and that crows deaths are used as an early indicator for there being human disease in an area. Not only that, but West Nile virus has killed up to 45% of North American crows since 1999.

Mange is a possibility in bird species, but the parasites typically infest the non feathered areas such as the feet and beaks of afflicted birds. Bird mange goes by the name of Knemidokoptes. I have not observed any foot, beak, or eye deformities that Knemidokoptes seems to incur upon affected birds. Below is a photo of a bird affected by bird mange(Knemidokoptes.) 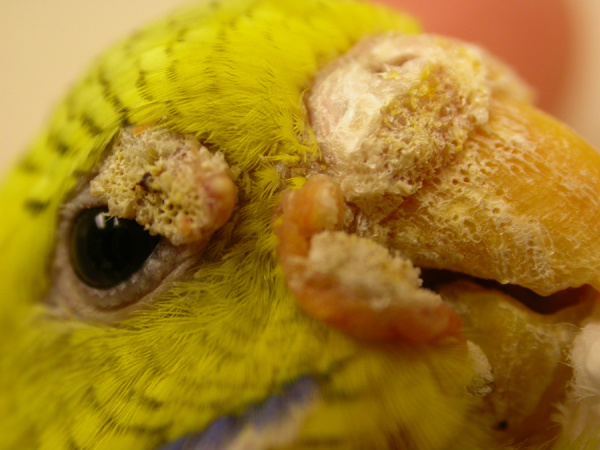 Recently having found out that covid is able to infect cats, dogs, deer and other animals, it has crossed my mind as to whether covid is transmissible to crows and other avian species. Crows are susceptible to avian flu varieties. Crows are scavengers, and no doubt come into close contact with human existence. I am sure most of you have seen crows fishing food wrappers right from dumpsters or garbage receptacles on the street then dining on their offerings.

With covid being able to be passed on to many different species of animals(all mammals so far as I understand it) it means that covid will never be eliminated no matter what your numpty politicians repeat ad nauseam about covid disappearing once they assault the population with. Yeah, it is going away, and your vaccine passport is only “temporary” now that government has bought vaccines for the next 3 years!

Perhaps once covid makes it into a species other than mammals, such as the avian genus, the mutations will begin to take on a different type of mutation that may possibly make it less or more transmissible, or possibly even more virulent? I really do not know either way if it is possible or not, though I think myself capable of independent thought, and the question has entered my mind, so I thought I would share it on this site.

The covid spike protein and the subsequent covid-19 most definitely seems to be something that was engineered in a lab somewhere in the world, and quite possibly even been purposefully released in order for some powerful institutions and individuals to carry out nefarious plans and gain tremendous power over governments, their populaces, all the while making billions upon billions of dollars in the process of their power play.

From my understanding most viruses do seem to become less virulent over time, as has covid over the nearly two years since it has been unleashed upon the populace. Though with this spike protein being the new kid on the block I think it might be fair to say that nobody really knows how the future is going to play out, especially when the “all knowing” governments decided to jump into the black hole “vaccine miracle” being pushed by Bill Gates and the pharmaceutical companies who stand to make billions from the program.

Need I remind you that the vaccines seem to not be the answer to the overhyped covid doctrine that was machine gunned into the mind of the masses unnecessarily and unceasingly for close to two years already. These vaccines do not stop people from getting covid, nor from passing it to others, or from the old and frail from dying from it, just as the flu does every year.

Natural immunity to covid is 13 times greater to someone who has had the virus than those with a covid vaccine. Not only that but after taking into account comorbidities, a vaccinated person is 27 times more likely to have a symptomatic case of covid, over someone with previous infection and natural resistance to the virus.

This engineered spike protein and covid is a future of uncertainty that nobody really knows where it is going to take us. All the while our bought & sold and all to naive, incompetent and idiotic politicians do not even have the fortitude or intelligence to question a narrative that is being FORCED upon us by big pharma, megalomaniacs and the institutional powers raking in billions of dollars and gaining even further control of sovereign(?) countries and the subjects contained within.

I for one have been exposed to covid on multiple occasions. The first is the worst, though in reality not bad at all. I have been much sicker with the flu more than once. After the first time, the rest are nothing. I am sure that I have had every strain that there is, and would not want it any other way. Quite honestly I would be worried if I did not get covid. My truth is that it is beneficial to my future health. What do you think an immune system is for.

The fact that government will not recognize a natural immunity that is 13 times stronger than a vaccine that is already becoming useless against a mutating virus is highly dubious and a red herring as to the devious nature of this covid doctrine that has been burned into the collective minds of a highly susceptible population. Covid is all about making money for the partners and stakeholders of corporate colonialism and taking freedom and power away. An economic hit. The mainstream media and government covid terror campaign is the frontline weapon being wielded against the populace.

With the vast majorities chance of dying from covid being damn close to ZERO, you seriously have to wonder if this vaccinate everybody debacle is going to come back to haunt people due to not acquiring the natural immunity of the strains as they mutated naturally.

The site of quite a few crows in a dilapidated state, and now I ramble on past my bedtime, with all these thoughts that will probably steal even more sleep.

Let us hope than an mammalian-avian covid genus crossover does not end up creating a potent mutation known as crowvid.

Some consider it good luck to be pooped on by a bird. Pity victim number one if the crowvid turns out to be the new Black Death, or tattered greyish feathers death anyways. Personally I am not worried in the slightest. I have been strained to the max and am immune to all, including the government and mainstream media terror campaign of epic proportion and distortion.